Back in February I joined a bunch of the other WesternDevs to talk about Ergonomics and one of the topics we touched on was ergonomic keyboards. As I said in the podcast, years ago when I worked on a factory line I got carpal tunnel really bad. Ever since I have to watch the peripherals that I use when I work for long periods on the computer. If I don’t, and a good example of this is if I use a built in laptop keyboard for a two to three 8+ hour days in a row, I will get crippling pain in my fore-arm and elbow. Since I spent no less than 8 hours a day in front of a computer, choosing a keyboard and mouse combination is pretty important for me.

Historically I’ve used a Microsoft Wireless Comfort Keyboard 5000 and it has served me well. Make no mistake, this is not an ergonomic keyboard. It simply has a few keys in the middle that are wider than normal to provide a bit of a spread between your hands.

Fellow WesternDev Simon Timms makes use of a clickety-clackety keyboard and swears up and down by it’s Cherry keys. Sure it makes him sound like he’s got a teleprinter machine pumping out the news in the back of his office, but for some reason the idea of a mechanical keyboard appealed to me. I don’t think I’ve had one since back in my 386 days.

After a bunch of research on ergonomic mechanical keyboards I settled on getting the Truly Ergonomic Keyboard (TEK). The only real decision you have to make when ordering is choosing between two models that have slightly different key layouts (double vs single keys in the lower corners of the keyboard). 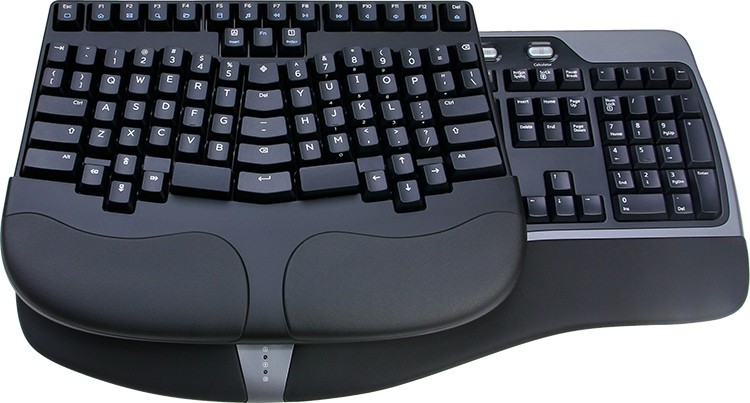 Getting started with the TEK is no more difficult than plugging in the USB cord. There’s no driver disk or software to install. Windows (10 in my case) recognized it straight away and I was off to the races….snail races that is.

Typing on the TEK takes a bit of getting used to if you’re a touch typist. The first touch typing issue that I ran into was the different orientation of the keys on the keyboard. On traditional keyboards, the main four rows of keys are arranged in columns that are angled from the bottom right to the top left.

On the TEK the columns of keys converge at the top middle of the keyboard, similar in pattern to an upside down V. What this means for your transition to the TEK is that you’ll constantly be reaching too far to the left when you move up from the home row and too far to the right when you move down from it. For me that meant that I was constantly reaching for the B key and, instead, getting the Backspace key (more about why it was the Backspace key shortly). There were other keys that I had similar problems on, but this was the most obvious since I was killing letters when I didn’t want to.

The second transition issue that I had was the location of many of the keys. Instead of having dead space in the middle like many ergonomic keyboards have, the TEK fills that space with a number of commonly used secondary keys. Windows | Command, Delete, -_, Backspace (which I just hit again while trying to type B) and Return all reside in the middle. When you first look at the keyboard it’s a novel layout. The Spacebar is split in two with the Return in the middle of them. The Shift and Ctrl keys also move up the keyboard by one row with Ctrl taking the places traditionally held by CAPS and Return. Getting used to Return being between the Spacebars was one of the tougher things for me at the start. I would type away and go to hit Return and get nothing….because I was actually pushing the Ctrl key. I have to say that having the Return key in the bottom middle of the keyboard between the Spacebars is a delight. I can’t imagine why this isn’t part of the standard layout. 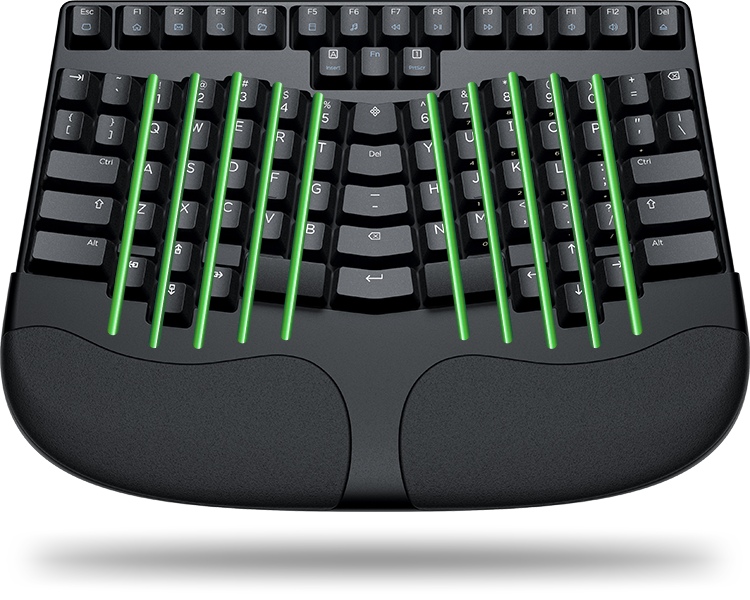 The layout of the TEK does have some things that didn’t initially work for me. As a developer I tend to use some of the secondary and tertiary keys pretty frequently. For example { and } are almost as common as A and E. Those two keys are not located on the far right one row above the home row. Instead they’re on the complete opposite side of that row. I’m still working on getting fluent with typing those keys.

I also Tab a lot and I’m very used to using Alt+Tab and Ctrl+Tab to work my way through UIs. The Tab key is moved to the top left of the keyboard and is a single width key instead of the more traditional double width. Learning on a double width key made me very lazy in my finger placement when I was typing Tab. I learned fairly quickly to reach up a row to get to Tab but I couldn’t gain the pinky finger control to both reach up and accurately push the right key and this really affected the speed of my keyboarding when working in code. Luckily TEK has a solution.

The TEK is fully programmable. Simply create your layout on the website and save a file that it will generate for you. Flip a DIP switch on the back of the keyboard and flash the new programming onto it. Now I have a Tab key in the middle of the keyboard between the 5 and 6. Striking that 1.5x sized key with my index finger is much more accurate and fast. I reprogrammed the CAPS key so that it was reversed and Insert was the default with Fn+CAPS becoming the alternate. These are the only two tweaks that I’ve done thus far but it’s nice to have this option if I notice inefficiencies in the future.

So far I’m very happy with the Truly Ergonomic Keyboard. The mechanical keys are a dream to type on and the layout feels as if it is more efficient (my typing speed is about the same as on a more traditional keyboard even though I’m still working on muscle memory). Most importantly I haven’t yet noticed any hint of carpal pain which tells me that this keyboard is, at a minimum, no worse for me physically than what I was using before.

The biggest question you’re all probably asking is if it’s worth the (at the time of writing) $250 USD price tag. It’s hard to say. I’m not disappointed with having spent that kind of money on it, but each to their own.